What is Margin trading in Cryptocurrencies? (28339)

Beyond the Classroom: The Rise of University Blockchain Labs (19999) 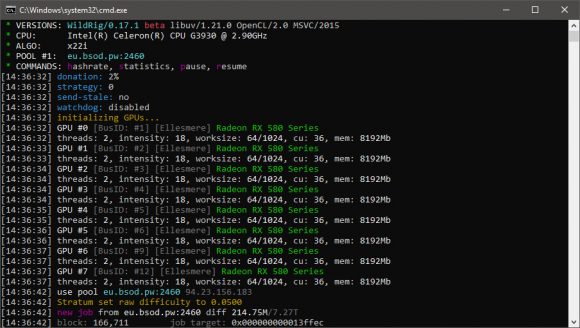 The latest WildRig Multi Beta AMD GPU miner is now ready for the upcoming SUQA/SIN fork as well with support for the new X25x mining algorithm that will be used by the project after the fork. NVIDIA miners can go for the already available T-Rex 011.0 miner with support for the X25 algo. The fork was supposed to happen on block 165,000 a couple of days ago, but it has been postponed for block 170,000, so a few more days until it hits. There are already a couple of mining pools running on the testnet with the X25x algo were you an give the new miners a go and see how they handle on your mining hardware. Do note that the X25x s heavier and requires more video memory compared to what the old X22i algorithm that is also supported by both WildRig Multi for AMD and T-Rex for Nvidia GPUs.

The latest WildRig Multi is currently available for Windows, Ubuntu Linux and HiveOS as a closed source binary and with a 2% developer fee built-in by default, though it can be reduced. wildkeccak and honeycomb algorithms are with fixed 2% dev fee with no possibility to change.