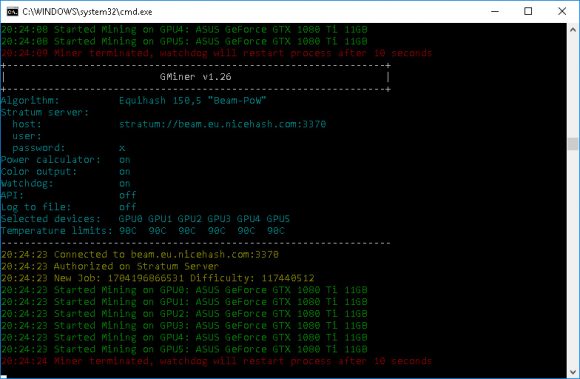 GMiner has been updated a lot recently with fixes and improvements and the latest version 1.26 is not an exception as it apparently tires to fix the BEAM mining support on NiceHash that has recently been introduced. Initially when NiceHash announced support for BEAM on their platform both GMiner and Bminer seemed to work just fine, however earlier today both miners started having issues with the platform. The problem seems to affect both miners for BEAM only on NiceHash, it does seem to work fine with other mining pools, but on NiceHash you are getting a lot of rejected shares with Bminer and pretty much all rejected n GMiner.

The just released Gminer v1.26 apparently tries to fix that and seems to succeed to some point, however after a while with everything seeming normal we are seeing the latest GMiner getting into a kind of look restarting itself without continuing to mine after that. The time it takes for the restarting loop does seem to vary from a mining rig to a mining rig, we have tried with a couple of them and in less than an hour all of them ended in the same watchdog reboot look for the miner. Running GMiner 1.26 on another pool for BEAM mining seems to be working just fine like with older versions, so the issue is apparently related only to NiceHash support. Of course you are welcome to try out the new miner and report if it works or not for NiceHash BEAM mining.

The GMiner Nvidia CUDA miner requires an Nvidia GPU with CUDA compute capability 5.0 or later as well as CUDA 9.0 driver support. Do note that GMiner is a closed source miner for Nvidia GPUs with binaries available for both Windows and Linux, also there is a 2% developer fee built-in the software.

Update: GMiner v1.26 has been temporary removed until properly fixed, so it is no longer available for download!

– To download and try the latest release of the Gminer v1.26 CUDA Equihash miner…