What is Margin trading in Cryptocurrencies? (28335)

Beyond the Classroom: The Rise of University Blockchain Labs (19997) 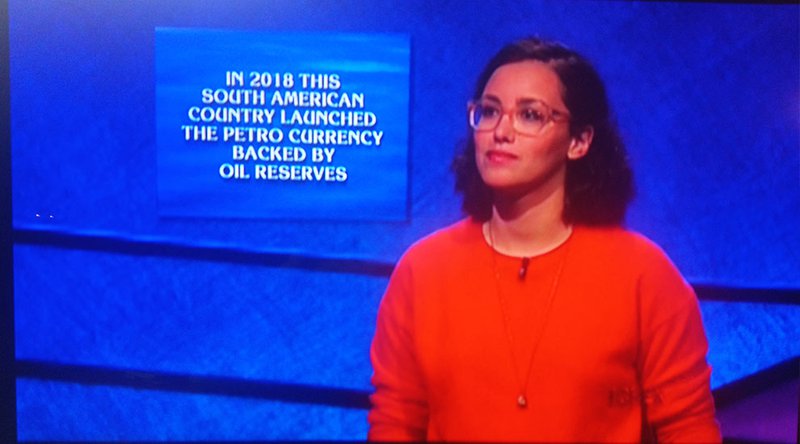 Is cryptocurrency becoming more mainstream? It could be if one of America’s most prominent game shows features an entire category devoted to it.

The November 29, 2018, episode of “Jeopardy!” — which has been on the air since 1964 — offered five unique questions centered around cryptocurrencies and their technology to test out its contestants’ knowledge on the subject: The results reveal that they did indeed know their fair share.

The “cryptocurrencies” category occurred in the game’s first round, with answers worth $200, $400, $600, $800 and $1,000 depending on their order and level of difficulty. The category was also among the final two to be tackled by the players, suggesting they may have felt a little less confident heading into it.

The first clue, selected by Phil Tompkins, a portable restroom service technician from Indiana, was a rather basic one: “An altcoin is any unit of cryptocurrency other than this original one.” Chris Williams, a consultant from New York, responded with the correct answer: “bitcoin.”

The contestants then moved to an entirely new category before Adriana Ciccone, a data scientist from San Francisco, jumped back to “cryptocurrencies” with less than a minute to go in the round. In true cryptocurrency fashion, the stakes suddenly got higher when the selected clue turned out to be a “daily double” — meaning she was able to risk any or all of her accumulated winnings on the result of that one answer.

Ciccone chose to risk $2,500 of her $5,200 pot, and the clue that followed read, “In 2018, this South American country launched the petro currency backed by oil reserves.” After just a moment’s thought, she responded with the correct answer of “What is Venezuela?”

Two more of remaining clues — both which were answered successfully — also focused on tokens, including one about Kik’s “Kin” token and the ill-fated “Coinye” token.

The $600 clue finally got technical: “Each transaction is a ‘block’ connected in these digital ledgers that enable cryptocurrencies to work.” (Okay.) Fortunately, Ciccone was able to respond with “What is a blockchain?”

This isn’t the first time “Jeopardy!” has tested players’ knowledge of digital assets. Back in April 2018, the show featured a clue in which “What is bitcoin?” was the correct response. The clue read, “In December 2017, one unit of this cryptocurrency was 15 times more than an ounce of gold.”

In early November 2018, “Jeopardy!” was renewed through 2023. This will bring its television run to nearly 60 years. The fact that such a long-running show would feature cryptocurrencies in such a prominent way, combined with the fact that the clues were all answered correctly by men and women from such different walks of life, suggests that digital assets are indeed venturing deeper into mainstream territory.

Test your own Bitcoin knowledge in our quiz:  Novice, Intermediate or Expert? A Quiz to Test Your Bitcoin Knowledge