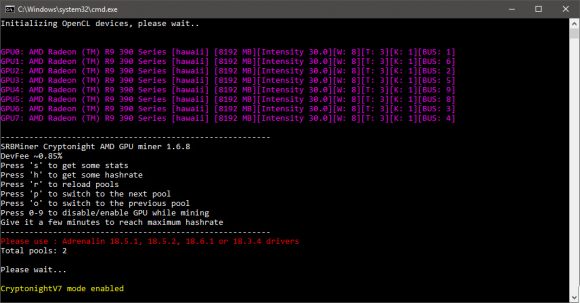 The latest update to the CryptoNight AMD GPU miner SRBMiner to version 1.6.8 brings support for a new mining algorithm – CryptoNight V8, this will be the new algorithm used by Monero (XMR) as Monero will fork on block 1685555 (around October 18th), so make sure you are ready to mine it after the fork to the new algorithm. The miner should now start up a little bit faster and there are some small performance improvements on some video cards. Also note that the developer fee is now ~0.85% for both normal mode and algo switching mode in the new version. There are also a number of other fixes and improvements, you can find the full changelog below.

SRBMiner V1.6.8 Full Cangelog:
– New Monero algo added (normalv8)
– Small speed increase on some cards
– Fee is now ~0.85% for both normal mode and algo switching mode
– Faster miner startup
– Pools with different algos can now be used in pools.txt, miner will re-init on switch
– Fixed bug when setting compute mode on more than 9 cards
– Fixed a bug showing bad date for ‘connected since’ and ‘average share find time’
– Gpu hashrate watchdog now won’t trigger if user is not connected to a pool
– reboot_script parameter removed and added ‘reboot_script_min_rig_speed’ and ‘reboot_script_gpu_watchdog’ instead
– Added more logging in gpu init part
– API parameters now have to be set in start.bat (--apienable, --apiport, --apirigname) , removed them from config.txt
– Press ‘o’ to switch to the previous pool from pools.txt
– If you add ‘stratum+ssl://’ before the pool address, TLS will be automatically enabled