Beyond the Classroom: The Rise of University Blockchain Labs (7346)

What is Margin trading in Cryptocurrencies? (7089) 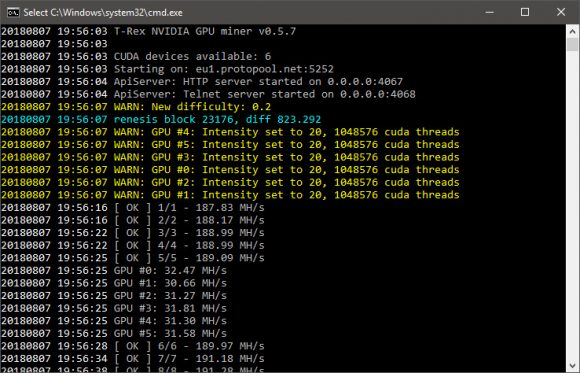 The T-Rex miner is one of the newer GPU miners out there and it is an interesting option for Nvidia mining rig owners that are looking for profitable new coins based on less popular mining algorithms. Since we last covered the miner there have been some new additions of the supported mining algorithms, namely x16r, x16s and renesis along with some performance improvements in 0.5.7 for a few extra percent of performance in renesis, hsr, x16r, x16s, x17 and c11.

Performance wise we were a bit surprise that the X16R and X16S algorithms are not only now slower, but in fact at times may be even a bit faster at times compared to the latest z-enemy miner 1.14, at least what the miner reports. Also the performance for mining Renesis (RESS) is better than the official fork of ccminer for that algorithm, so you might want to check it out if you still haven’t done so.

Finally, just a reminder that T-Rex is a closed source miner and that there is 1% development fee built-in and you need to have a recent video driver installed as the binaries for both Linux and Windows are compiled for CUDA 9.1/9.2.