What is Margin trading in Cryptocurrencies? (38129)

Beyond the Classroom: The Rise of University Blockchain Labs (25146) 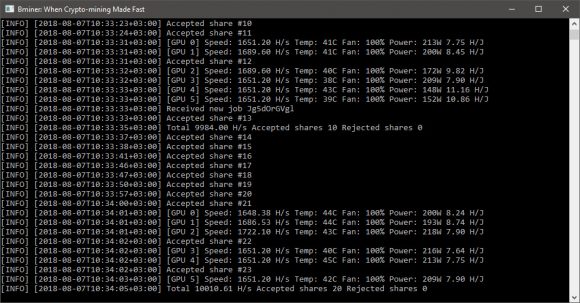 Bytom (BTM) mining support has been introduced in the previous Bminer 9.0.0 release and back then it was faster than the alternative miner. Since then however the NebuTech BTMiner has taken the lead in terms of hashrate. With the new Bminer 9.1.0 that substantially increases the BTM mining speed with up to 30% over the previous version Bminer is catching up, but still a bit behind what the latest NebuTech BTMiner 7.0 is providing.

With Bminer Bytom (BTM) mining support (tensority algorithm) was originally introduced to support f2pool mining and it seems that not all mining pools are still supported, for example Bitmain’s AntPool still does not work in the new version, though the problem is probably related to the pools that use of workers instead of payment addresses. So apart from further improvements in performance this is another thing that needs work in order to be competitive as far as BTM mining goes.

Bminer also supports mining of Equihash and Ethash, but both of these algorithms have been taken over by ASIC miners already or will soon be, even though Ethereum and some other Ethash coins are still often found in the top of most profitable coins to be miner in mining calculators. We remind you that this is a closed source Nvidia GPU miner available for Linux and Windows in the form of pre-compiled binaries and that there is a 2% development fee for BTM and Equihash, 0.65% for Ethash and 1.3% for dual mining Ethash and Blake.

– To download and try the latest release of the Bminer 9.1.0 Nvidia GPU miner…